The morning dew has long since disappeared as a gentle breeze mingles the smells of cook fires and sagebrush in the village of Simiiji.  Herbs are hung to dry on a horizontal pole; white sage, yarrow, thistle and rose hips, as we would call them today.  Selected seeds have been ground and pulverized, mortar and pestle style in little holes in nearby sandstone outcroppings.  The “spices” are rubbed into rabbit flesh.  Some seeds are thrown right onto the fire for the sudden flash of leaping red-yellow flames and the popping sound.

Women are busy with preparations.  They instruct little helpers.  The men stand in groups, talking.  This is the longest day of the year, the Summer Solstice.  The villagers know it and will observe it with ritualistic ceremonies.

An ancient Chumash ceremonial complex helped structure the lives that tamed the land and studied the sky.

Burro Flats painted shelter includes an astronomically significant display of elaborate and very beautiful polychrome paintings recording the Chumash involvement with the sky.  The area is a protected historical site.

Sky Valley is, and always has been, about space.  It’s about the space between the ears where imagination soars and spans years long gone and years still to come.

Prehistoric astronomers and space-racing engineers looked to the sky for answers to their fears.

Sky Valley Ranch was a time and a place between the ancients and masters of space.

Henry Silvernale was 65 when he decided to become a rancher.  He had been a successful dentist in Santa Monica.  In 1939 he bought the land that became Sky Valley Ranch.  Henry raised cattle and horses.  He grew some crops, mostly to feed the livestock.  His grandchildren raised quail, rabbits and chickens.  The local landscape played a supporting role in many western movies.  Henry liked to be involved with movie people.  The grandkids wrangled horses for studio outfits.

There were many pets on the ranch, including a bobcat.  One day Henry’s granddaughter Sally, bought her Dad Max, a six month old Samoyed Dog because his hunting dogs were letting him down.  Max was a zoologist at Santa Monica College, and a licensed falconer.  He asked Sally, “What am I supposed to do with a snow dog?”  She told him, “Samoyeds are easy to train.”  Max had a Coopers Hawk and a falcon, and to his amazement he trained them to work with the dog.  Each raptor took its turn riding, perched on the Dog’s back.  When the dog flushed  a rabbit from the brush, the bird would launch from the dog’s back and grab the rabbit.  It was like a jet thrusting off an aircraft carrier.

Sky Valley Ranch was a fifteen year proposition.  The land was sold to North American Aviation in 1954.  The Company had leased nearby land during the Second World War when it was the largest producer of airplanes in the country.  Planes made in the Santa Susana Mountains  pursued enemies overseas.

When the Cold War heated up, the Air Force took over operations.  The area became known as “The Hill”.  And then NASA started testing rockets for the moon launches and space shuttles.  The name Rocketdyne was used for a time then the Santa Susana Field Lab (SSFL) became the area’s official title when Boeing was put in charge.  A majority of the old buildings and facilities have been removed from the mountain.  The focus now is open-space for wildlife.

Freeways and development have made the area critical to wildlife genetic diversity.  Mountain Lions need to roam; deer need fresh foraging spaces.  The SSFL is in the middle of a wildlife corridor, linking the Sierra Madre Mountains to the Santa Monica Mountains.

To quote Boeing, “The Santa Susanna Field Laboratory is a former Federal Government rocket engine testing and energy research facility in southern California.”  Many biological studies are under way.  To further quote Boeing, “Boeing is committed to a comprehensive and protective clean up that protects the eco-system and preserves the site as an open space for future generations.”

Imagination, innovation and testing brought about the current situation.  Technologies, abilities and sensibilities have greatly improved.  With grace and sincerity the transition ahead can be one of humility and cooperation.  Progress is possible.  An open space is a terrible thing to waste, especially one so full of history, and beauty and wild life opportunity.

In February a mountain lion was caught and collared at Sky Valley.  The next day it (P-64) was caught on camera successfully crossing under the 101 freeway at Liberty Canyon on its way to the Santa Monica Mountains. 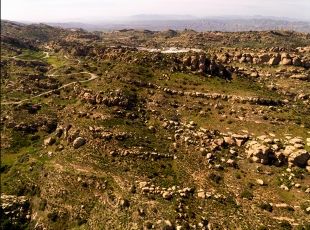 part III in a series of III